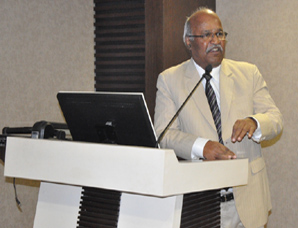 Prof. P. Gunasekaran is a Senior Professor of Microbiology in India and former President of Association of Microbiologist of India (AMI). He has 32 years of teaching and research experience in Microbiology, Biotechnology and Genomics. He was previously occupying the position of the Vice Chancellor, Thiruvalluvar University, Vellore since July 2012. Currently, he is the President of Biotechnology Society of India (BRSI) and Member in the Tamil Nadu State Council for Higher Education (TANSCHE).

At the administration side, he occupied several positions such as Coordinator of the School of Biological Sciences, Coordinator of the DST-FIST programme, Coordinator of University with Potential for Excellence, Special Officer (Planning and Development), Member Syndicate (twice), and member in almost all sub-committees of Syndicate including the Finance committee and member of Syndicate committee to look after the university in the absence Vice-chancellor of Madurai Kamaraj University. He has been nominated as Member to the Tamil Nadu State Council for Higher Education.

Having received uncountable awards and recognitions, he stands now as a foremost authority in Microbiology in India.

The VIT family welcomes him and is proud and honoured to have him guide us.

The profile of Dr. P. Gunasekaran can be accessed with the following links: