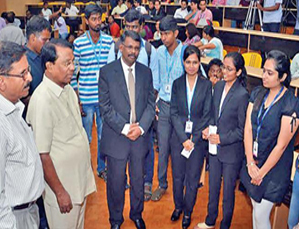 He appealed to students to contribute immensely to Modi’s pet schemes of “Digital India” and “Make in India” to bring about import substitution.


He appealed to students to contribute immensely to Prime Minister Narendra Modi’s pet schemes of “Digital India” and “Make in India” to bring about import substitution..
Delivering a special lecture at the Vellore Institute of Technology here, he said
“You should develop your knowledge so that you get ready to compete in this world and contribute to the development of your country,” he said.


Noting that it was Sri Lanka which first introduced the concept of free-trade zones, Krishnamoorthy said China replicated the model by establishing Special Economic Zones in Shanghai. “They established the zones in Hongkong as well,” he said.


Chancellor of VIT G. Viswanathan said Asian countries should join together and form a union on the lines of European Union and introduce an Asia common currency to ensure vast economic development.


“If all countries maintain good relationship, then India’s spending on defence could be used for developmental activities. Deccan Chronicle Executive Editor R Bhagwan Singh asked students to take active part in political process. “Be in touch with world by reading books in libraries and keep always abreast of your worldly knowledge by reading newspapers,” he said.