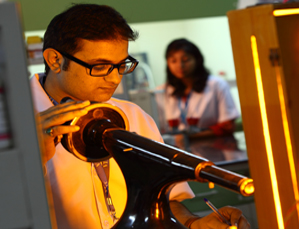 Racing ahead in Research Publications

According to Scopus database, with 1,415 papers this year, the varsity is not far behind IISc

VIT University, in the last few years, has been racing ahead in the number of research publications. The institution now stands in second position, next only to the Indian Institute of Science (IISc), Bangalore, in terms of number of publications.

As per the Scopus database in August, VIT University has so far come out with 1,415 research publications this year. IISc has 1,601 publications to its credit this year.

The Vellore institute’s publication numbers has been increasing since 2010 when it was 440. In 2011, the university had 620 publications, followed by 907 in 2012, 1,701 in 2013 and 2,019 in 2014. Last year, the university had 2,377 publications to its credit. Sustained efforts to improve publications began in 2010, according to G. Viswanathan, VIT’s Chancellor. “Then, the total number of publications was 440. We decided to give a push to encourage all professors and research students. We started to give them incentives to take up research to take the institute on a par with top institutions in the country,” he said.

Now, the university has overtaken all Indian Institutes of Technology in the country. “We are now competing with IISc,” he said. Among the schools in the university, the School of Advanced Sciences occupied the top position in terms of number of publications followed by the School of Biotechnology.

"The engineering schools have also started to contribute. The undergraduate students are also encouraged to take up research work. Next, we want to improve the number of publications, then go for patents and products," he added.

S. Babu, associate dean, research, said the H-index, which determines the number of citations was 56 now from 30 in 2011. "The university provides seed money to faculty applying for funding for projects from government agencies to take up preliminary works. They are also supported in case of any need for equipment," he said. The university also grants cash awards for faculty and research students, he said.?