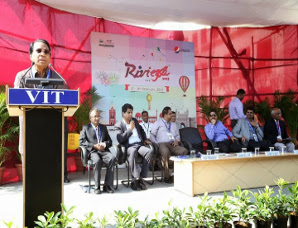 VIT’S very own international sports and cultural festival started with a bang on 5 feb’15 and went on till 8th feb . This year , the campus witnessed the presence of Music Maestro MOHIT CHAUHAN who enchanted the audience with his melodious voice.
Playback singer BENNY DAYAL,music composer and playback singer Suresh Peters and actor-singer Vasundhra DAS also managed to enthrall the audience with their singing and all the students seemed to rejoice themselves. Day 3 was owned by the band INDIAN OCEAN which didn’t fail to cater to the expectations of the students. Performances by Dance club, Music club, STYLECHECK’15 were also lauded by one and all.
Several events such as DANCE WORKSHOPS , KHALBHALI( street play contest),RESONANCE ,SUPER SINGER etc served the interests of all the students and were enjoyed by all.Amidst numerous events and games, Students also gave voice to social issues such as child labour and female foeticide through a walkathon. This year, the theme of the fest was “COLORS OF INDIA” which was beautifully executed through a parade under the banner “AIKYA”(UNITY) to showcase the country’s cultural diversity .
RIVEIRA went a notch higher with ARJUN KAPOOR stepping in and becoming the chief guest for the Valedictory Function. He received a roaring welcome and felicitated the organising committee and winners of all the events held during riveria.