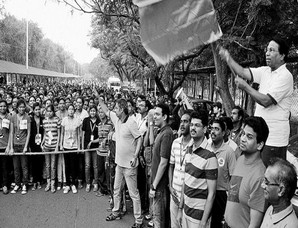 Riding on this year’s theme — Colours of India, the four-day cultural fiesta sought to highlight the country’s diversity. As G. Viswanathan, university’s Chancellor, put it, “We need to utilise the diversity for the strength of India. At VIT campus itself, we have students speaking 40 languages, including foreign languages,” he said at the inauguration.

‘Be your natural self’

For enthusiastic students, who had gathered for the inauguration, Krishnamachari Srikkanth, former captain, Indian Cricket Team, had a simple message to convey. “In the process to prove ourselves, we lose out on the actual beauty of life. Laughter and enjoyment is important but we forget it in the process of making big in life. Be your natural self, stop seeking approval of others,” he said.

“Create the positive energy within you, shine with radiance as energy is the success of life,” he added. He expressed confidence that the Indian team would go on to win the cricket World Cup 2015 as in 2011.

As the university campus brimmed with life, Riviera 2015 has 100 events and 12 workshops lined up. At least 5,000 to 7,000 external participants are expected to participate in Riviera, besides students of the university, Gautam Gaur, committee coordinator of Events and Culturals said.

A packed Anna Auditorium was witness to fashion extragavanza as students walked the ramp for the Style Check prelims early during the day. VIT Roadies was one of the most popular events as over 400 students thronged for participation.

“The event has three rounds, starting with group discussion, personal interview and series of 14 tasks. This is being organised for the second time at Riviera,” Abhinav, student coordinator said.

The day also saw many other events such as Wanna Be RJ/VJ (Tamil). Its coordinator T. Divakar said participants were judged based on their compering skills.

They had to compere based on a situation in the first round, then dub for a video and then finally, take a creative take on expressing about themselves.

A workshop for aspiring DJs was part of the festival. Participants will be trained in sound production and mixing during the workshop, Pranav Sharma, its coordinator, said.

Singer Mohit Chauhan was all set to enthral the audience during a performance in the evening.

The Hindu is the media partner for Riviera 2015.