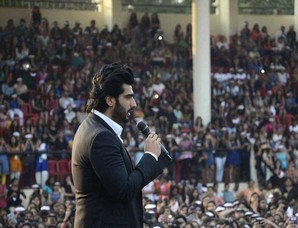 With AIB Knockout sparking a controversy recently, actor Arjun Kapoor feels that they did the show for a right reason — charity.

The actor, who was at VIT University for the valedictory of Riviera 2015 on Sunday, took questions from the students, including on the next AIB roast and whether he would star in Tamil movies.

AIB Knockout, a comic roast of actors Arjun Kapoor and Ranveer Singh and hosted by filmmaker Karan Johar, was organised by All India Bakchod (AIB), a comedy collective.

“The idea occurred to Ranveer Singh, me and AIB. We wanted to do something interesting for charity, like how Alia [actress Alia Bhatt] did a video. We wanted to do a little more concrete . So, we decided to call people and make fun of ourselves,” Arjun Kapoor told the students.

The actor said they managed to generate Rs. 40 lakh in three hours. He was happy that people liked the comic roast and stood by them.

On whether he would star in a Tamil movie, Arjun Kapoor said, “I would love to. I have grown up watching all kinds of films.” Replying to another question, he said he always wanted to become a director if not an actor.

As the curtains came down on the VIT University’s four-day festival, students poured into the outdoor stadium to get a glimpse of the Bollywood actor. The student organisers said the festival attracted a footfall of 30,000.

The actor presented the overall trophies to the VIT University for sports and cultural categories.

At one of Riviera’s premiere events, Frisk Factor, a dance competition held on Saturday evening, five teams battled it out for the top place. MIT, Chennai, bagged the first place, followed by MCC . The Hindu is the media partner for VIT University’s Riviera 2015.