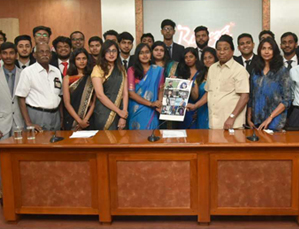 Film celebrities including playback singers Devi Sri Prasad and Shaan, actor-cum-playback singer Andrea Jeremiah, music director Ghibran and radio jockey-cum-actor RJ Balaji are among those who will be performing at Riviera, the annual International Sports and Cultural Carnival to be conducted by the Vellore Institute of Technology at the VIT campus here from February 14 to 17.
Dr.G. Viswanathan, Chancellor of VIT told newspersons here on Monday that about 38,000 students from 700 universities and colleges from 30 countries in Asia, Europe and Africa will be participating in the international event. Noted cricketer Murali Vijay will inaugurate the festival at 10 a.m. on February 14. Riviera which was started with a budget of Rs.two lakhs in 2001 will entail a budget of Rs.2.25 crores this year. Prizes worth Rs.20 lakhs would be given to the winners of the various events, he said.
Chancellor also noted the objective of the Riviera is to nurture the leadership qualities among the students, developing team spirits with youngsters and also bring in oneness among the students communities
“Shatter the monotony” will be the theme of Riviera 2019, according to Mr.M. Rahul Vignesh, student organizer (publicity). We want to break the monotony of eating, studying and sleeping”, he said. Bharat Gupta, student organizer (events and culturals) said that 650 students took part in the Model United Nations conducted as part of pre-Riviera events. The VIT marathon, involving a 9.9-km run would precede the inaugural function on Thursday. About 7000 students would participate in the marathon which would start from the VIT 3rd gate at 6 a.m. Sonu Nigam, legendary playback singer will perform on February14, while Ayushmann Khurrana, Hindi actor-cum-singer, Andrea Jeremiah, actor-singer and Sathya Prakash, Vijay TV Super Singer fame playback singer will sing on February 15. RJ Balaji and actor Priya Anand will participate in the promotion for the Tamil film, LKG to be held at Anna Auditorium in the VIT campus on February 15. Devi Sri Prasad (popular as DSP), music director-cum-singer and Shaan, actor-singer will perform on February 16. `Frisk factor’, a dance competition will be held on the same day, with music director Ghibran as judge. Another highlight this year will be `Sahiti’ a string of cultural events in Telugu spread over the first three days. Comedians Auto Ramprasad and Getup Seenu will be performing on February 16. `Aikya’, a programme highlighting global integration will be held as part of Riviera. Mirnalini, student organizer said that literary, art and cultural events in Tamil, titled `Sangamam’ will be held during Riviera. This will include, `Rollinggg Sirrr’, a short film, essay, poetry and oratorical competitions under the title, `Oru Kadhai Sollunga’ and dance, street dance and drama competitions under the title, `Konjam Nadinga Boss’.
A total of 14 sports events including cricket, snooker, swimming, volleyball, tennis and athletics were conducted as pre-Riviera events, with SRM Institute of Science and Technology, Chennai bagging the first prizes both for men and women. In all, there will be 129 events during Riviera. Actor-singer Shruti Haasan will deliver the valedictory address on Sunday February 17.
VIT Executive Director Dr. Sandhya Pentareddy, Vice Chancellor Dr. Anand A Samuel, Pro Vice Chancellor Dr. S. Narayanan, Students Welfare Director Dr. Amit Mahindrakar, Riviera Convenor Dr. S. Sasikumar were present during the press meet.