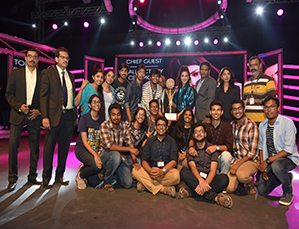 Riviera’2019, the 19th edition of the annual International Cultural and Sports Carnival conducted by Vellore Institute of Technology kicked off with a 9.9-km marathon in which 4000 students participated, here on Thursday. Dr. Sekar Viswanathan, Vice-President of VIT flagged off the marathon from the third gate of VIT on Tiruvalam Road in Katpadi.

Inaugurating Riviera’2019 and distributing prizes to the winners of the marathon, Mr. Murali Vijay, India test cricketer said that while higher education and sports are essential for success and progress in life, it is the latter which gave self-confidence. “While political interference in the selection of the Indian cricket team is inevitable, it is your ability to rise above political influence and prove yourself through your efforts and talents which will take you to the heights of glory in the game”, he said. Mr. Vijay expressed hope that the Indian cricket team—unparallelled among all the nationals cricket teams in the world—will win the forthcoming World Cup.

About 38,000 students from 700 universities and colleges from 25 countries in Asia, Africa and Europe are participating in Riviera’2019 which goes on till February 17. In all, 129 sports, cultural and literary events would be conducted during the four-day carnival.