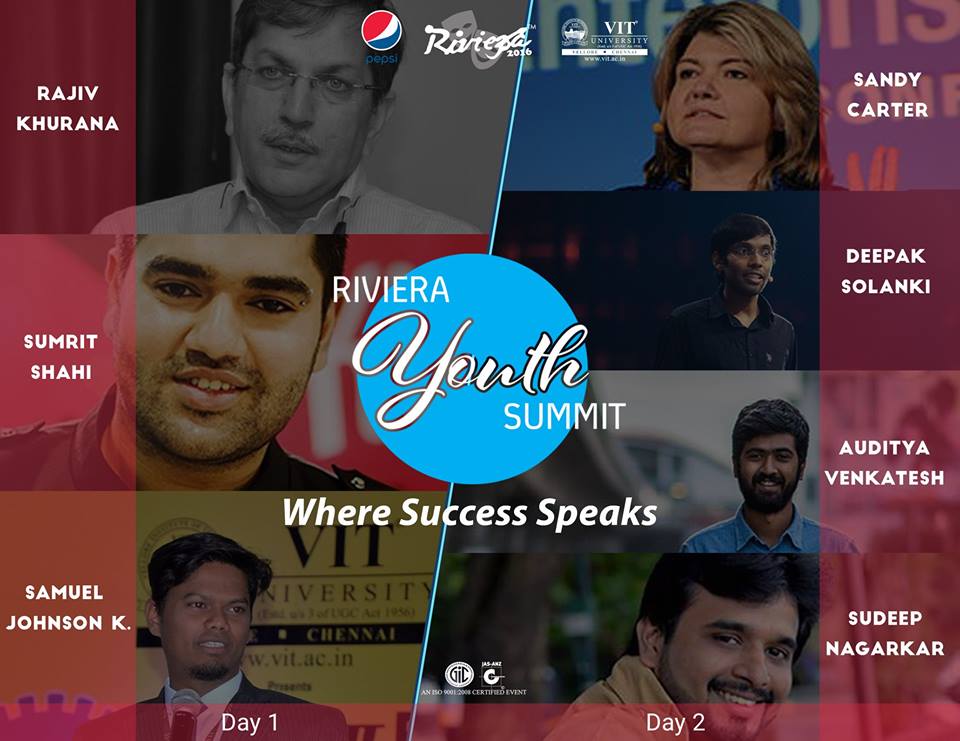 The Riviera Youth Summit was held on the 30th and 31st of January . The event was centred around the theme of Riviera’16 – ‘’Unmask The Mask’’, where participants were given a chance to interact with personalities of different fields who have been successful despite facing many odds and failures early in their lives.

The motive behind the event was to take the participants away from the daily cacophony and conundrum and evoke their dreams and aspirations that were still lingering somewhere in the corner of their minds, behind all the engineering and other obstacles that abstained them from pursuing their passion.

All the speakers were invited to inspire and motivate the participants, and to tell them it’s never too late and that there is no shortcut to success.

The speakers for Day 1 were Mr. Rajiv Khurana- an International Management Consultant, Trainer, Venture Mentor and Executive Coach by description. He is a well published writer, author and digital expressionist and has been a TV and Radio anchor. He is also an inquisitive award winning photographer and a serious poet. Sumrit Shahi – An Indian Novelist and screenwriter. Author of ‘Just Friends’ , ‘A Lot Like Love’ etc. He wrote his first novel ‘Just Friends at the age of 17. In 2015, he was chosen by Hindustan Times in the list of Top 30 under 30 young achievers in the country, terming him as a 'writing rockstar of the young' and Mr. Samuel Johnson – A social entrepreneur.


The speakers for Day 2 were Mr. Deepak Solanki – The CEO of Velmenni and implementor of Lifi technology. Mr. Sudeep Nagarkar – An engineering student turned author who has written best-sellers like- ‘Few Things Left Unsaid’ (2011) ,’That's the Way We Met’ (2012) ,’It Started With a Friend Request (2013)’ and ‘Sorry You're Not My Type’ (2014) and Mr. Auditya Venkatesh , also popularly known as Audi. This travel photographer is charming and witty with an exemplary skill for photography.


The added attraction was a video conference with Ms. Sandy Carter.-The IBM Global General Manager .She is a woman, who needs no introduction. A woman who has broken all stereotypes, who has followed her passion and perfectly blended it with profession , who is so successful and yet so humble


All the speakers concluded with one message that ‘In order to succeed we must first believe that we CAN’. This belief led them to where they are today. With a strong message and a lot of motivation the event was a complete justice to our theme and ended with a roaring applause!

Through the day, students battled it out in various competitions that spanned many languages. The diversity of contests included ‘Barfi’, a dumb charades contest in Hindi, a Telugu antakshari and essay and elocution competitions in Tamil.

“The students are required to comb through the campus for clues across two days; only that they are given these clues in the form of cyphers which will help them decode a mystery,” said Vedant Jain, who was organising ‘Prison Break’, one of the many challenging events taking place at the festival.

At the VIT Talent hunt, students from the college put up performances ranging from beatboxing to using nunchaks when blindfolded.

The day ended on a high note with a scintillating performance by Sunidhi Chauhan, who belted out her most popular chartbuster songs to a packed audience.