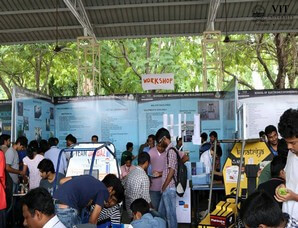 The need for youngsters to imbibe the courage to innovate and propel the country forward in all aspects was emphasised by Dr V Ponraj, ex-chief scientific advisor to former president of India Abdul Kalam, on Friday.

Inaugurating the tenth two-day student convention of the southern region of the Society of Automotive Engineers, organised by the School of Mechanical and Building Sciences at the VIT university, he said that the late Abdul Kalam wanted to motivate youngsters to dream about empowering India and help it emerge as a knowledge superpower. He added that engineers from NASA had remarked that the Indian youth have phenomenal intelligence, which became evident from the fact that the Indian space mission to moon discovered water molecules there in its very first attempt.

“Unless we go and compete, we will not realise our potential,” he said.

“You have to think of indigenous innovations that will help India beat its competitors in all sectors-- especially automotive,” he added.

VIT chancellor G Viswanathan, in his presidential address, urged the student community to develop a competitive spirit. “While India is the third largest producer of automobiles in Asia and the sixth in the world, we need to focus on lowering the cost of manufacture without compromising on quality,” he told the gathering.  School Dean Dr SK Sekar said that over 2,500 students from over 40 colleges and universities had gathered at VIT to take part in the two-day convention.

Since its inception in 2004, with a membership of 450, the SAE chapter at VIT, the largest in the country, has been championing new automotive technologies, he said.  Seven automotive and three aero-design teams attached to the SAE-VIT have won several prizes, both in national and international competitions, he said.  He added that this year, in addition to the regular 20 events, 23 new competitions will be organised.