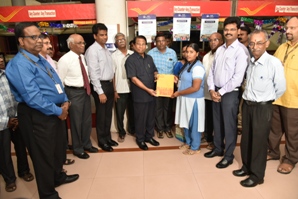 Sale of applications for VITEEE 2017 begins

Entrance test in 119 cities, including overseas locations, will be held from April 5 to 16

According to a press release, the entrance examinations for admission to B.Tech courses offered at the VIT University’s campuses at Vellore, Chennai, Andhra Pradesh and Bhopal are scheduled to be held from April 5 to 16, 2017.

The Computer Based Test would be held in 119 cities including Dubai, Kuwait and Muscat.

The forms can be obtained by sending a demand draft for Rs. 990 drawn in favour of VIT University payable at Vellore to the Director – UG Admissions or by cash payment at selected post offices across the country. Issuing of online and offline application has commenced from Wednesday.