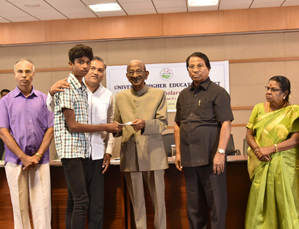 Scholarship worth Rs.42 lakhs distributed to 501 students under UHET

Former Chief Justice of the Gujarat High Court Justice P.R. Gokulakrishnan distributed scholarship worth Rs. 42 lakhs to 501 needy students on behalf of the Universal Higher Education Trust (UHET) under the second phase of the Universal Higher Education Scheme (UHET) during the academic year 2015-16 at a function organised by the Trust at the VIT campus here on Tuesday.

The UHET was established under the leadership of G. Viswanathan, Chancellor of VIT University four years ago with the aim of ensuring that poor but meritorious students who got admission in higher educational institutions on successful completion of Plus Two did not discontinue their education owing to poverty and the resultant inability to pay the fees.

Mr. Gokulakrishnan appealed to the students to use the knowledge acquired during their higher education for the development of their country. “There is need to change the trend of students going abroad for work soon after they come out of the portals of higher education”, he said, and congratulated Mr. Viswanathan for having launched the UHET aimed at ensuring that all those who completed Plus Two successfully in Vellore district pursued higher education.

Mr. Viswanathan who presided said that scholarship totalling Rs.1,90,35,000 were disbursed to 1717 students through the UHET during the current academic year. Seventy-five per cent of the beneficiaries were first generation learners, and 65% of them were women. Any country which gives importance to women’s higher education will become an economically developed country, he said. The Chancellor urged the central and state governments to enable all those who successfully completed their school education to pursue higher education under the Right to Compulsory Education Act.