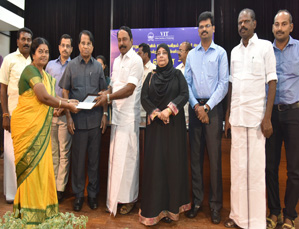 school Toilets to be cleaned through German collobaration

VELLORE: November 11, 2018 Toilets in government schools are to be cleaned through German collaboration to maintain hygiene in the school toilets under a Rotary Club-sponsored scheme to be launched shortly in Tamil Nadu, according to Mr. K.A. Sengottaiyan, Tamil Nadu Minister for School Education. One van would be provided for every 20 schools, and 100 vehicles would be readied before December, he said. Distributing prizes on behalf of the Vellore Institute of Technology to the headmasters of 59 high/higher secondary schools in Vellore district who achieved 100% passes in SSLC/Plus Two public examinations in 2018 at a function organized at the VIT campus here on Sunday, Mr. Sengottaiyan said that 3000 smart class rooms would be provided in government schools and Internet facility provided to 9, 10th, 11th and 12th standard students of government schools before December. The Tamil Nadu government was also taking steps to enable the students to study through their cell phones, he said. The minister said that skills training would be provided to Plus Two students to enable them to get jobs immediately after passing Plus Two. The government, through various measures, has created confidence among the government school students to face competitive exams such as National Eligibility-cum-EntranceTest (NEET) for medical admissions. Through NEET coaching, 1000 students of government schools have got admission in MBBS, he said. Mr. Sengottaiyan said that the above steps are among the many being taken by the government to bridge the gap between private and government schools in the quality of education imparted to the students. School uniforms are being changed in such a way that none can distinguish between a government and private school students by his/her uniform. From January next, LKG and UKG classes would be introduced to the 52,400 students studying in Anganwadi centres in order to fulfill the aspiration of the parents to see their children speak in English, he said. Responding to the suggestion of Dr. G. Viswanathan, Chancellor of VIT that the central and state governments should discuss with the managements of educational institutions periodically to thrash out issues concerning education, the minister said that after getting the approval of the Chief Minister, he would initiate the process of discussions with management representatives from next week. Dr. Viswanathan who presided pleaded for streamlining the recruitment of teachers in order to ensure that only those who are interested in teaching are recruited as school teachers. He wanted the government to take steps to put an end to the situation where teachers’ degrees are bought. The Chancellor noted that the number of schools which achieved 100% results in the Plus Two public examinations in Vellore district has increased to 87% this year from 83% in 2016 and 85% in 2017, and to 88% this year from 86% in 2016 in SSLC. Dr.Nilofer Khafeel, Minister for Labour and Employment, Mr. S.A. Raman, Collector of Vellore, Mr. S. Ravi, Arakkonam MLA and Mr. G.V. Selvam, Vice-President of VIT participated. Mr. Sengottaiyan distributed prizes to the headmasters of 59 schools with Rs. 5000 cash award and citation for each school which achieved 100% results. Dr.C.R. Sundararajan, Professor-in-charge, Centre for Sustainable Rural Development, VIT welcomed the gathering. Mr. Mars, Chief Educational Officer, Vellore proposed a vote of thanks.