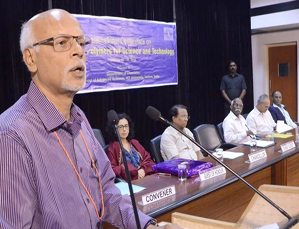 Smart Polymers catching up in healthcare

In the last 10 to 15 years, the role of polymers has been increasing in medicine, particularly in diagnostics and drug delivery system, according K.N. Ganesh, director of Indian Institute of Science Education and Research (IISER), Pune.

Dr. Ganesh was speaking at the inauguration of an International conference on “Advanced Polymers for Science and Technology” organised by the School of Advanced Sciences of VIT University on Monday.

He said that polymers were developed as material to replace natural products that were dwindling. “Natural materials have been replaced by synthetic polymers. This has contributed to preservation of natural resources. Over the years, the application of polymers has increased and is used in textiles, sports goods and many other day-to-day needs. In the last 10 to 15 years, it has an increasing role in medicines,” he said.

Dr. Ganesh said that polymer was interfaced with nanotechnology, and had its application in energy too, besides in material and medicine. “Smart polymers have come in. There are polymers that can change its properties, and can self-heal. Polymer composites have come. They are playing an increasingly important role,” he added.

G. Viswanathan, chancellor of VIT, said that polymers played a major role in India. “India stands third in the world in polymer consumption after China and the U.S. By 2020, the country’s requirement of polymers will be two crore tonnes,” he added.

Dr. Ganesh emphasised the need to bring in social relevance and industry applications in addition to basic science teaching. Problem-solving capabilities should be imparted, he added.

The three-day conference was being held with an objective to popularise polymer chemistry and would discuss its applications in frontier areas such as medicine, including for cancer therapy and drug delivery.

Isabel M. Marrrucho from IST, Portugal, said the conference would facilitate a cross talk between fundamental research and applied research.

Anand A. Samuel, Vice-Chancellor of VIT, R. Vijayaraghavan, Dean of School of Advanced Sciences, and Vijayakrishna Kari, convenor of the conference, spoke.