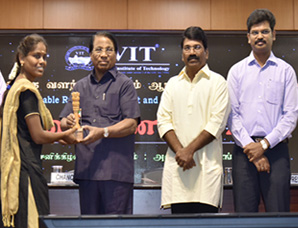 The annual STARS – Support the Advancement of Rural Students – Day was held at Vellore Institute of Technology on Saturday. Actor and motivational speaker Dhamu took part in the event and extolled students to observe the code of conduct most essential in life. Founder and Chancellor of VIT, Dr. G.Viswanathan handed over prizes to meritorious students who had availed benefits under the STARS project and who set an example for others.

The project was launched in VIT in 2008 under the Centre for Sustainable Rural Development & Research Studies. It selects a girl and boy student from every district of Tamil Nadu and they are provided free quality education with food and accommodation. Over 513 students have excelled and are working in premier companies.

On Saturday, the annual STARS Day was held at Anna Auditorium in VIT. Speaking on the occasion, Dr. Viswanathan said that such an event was being held for 10 years and 67 per cent of the beneficiaries were first generation learners. He said that success would reach only those who pursued education and work hard. If all youth studied well and worked hard, India would become a developed nation. Dr. Viswanathan appealed to the students to give up complacency. Laziness would result in individuals losing in life and thwart the country’s march to progress.

Dr. Viswanathan said that there was no greater fulfilment than the completion of the STARS project. He said that the students should help other youth who were in need of assistance. He said that he himself was an example of a person belonging to a rural background and rising up in life. Recalling that he was a law graduate, he said that he got an opportunity to enter the Parliament through former Chief Minister C.N.Annadurai. He was able to interact with former Prime Ministers Indira Gandhi, Atal Behari Vajpayee and Y.B.Chavan, Jagjivan Ram, Karan Singh and Dange.

Education not only provided knowledge, but also helped in building character and discipline. If one had to emerge out of poverty, education was mandatory, Dr. Viswanathan said.

In his address, Mr. Dhamu said that former President A.P.J.Abdul Kalam had launched a scheme PURA for the development of rural areas. If students had to grow and prosper in life, education was most essential. Along with knowledge assimilated through education, sound physical health was also a must. If a situation arose where a youth had to go abroad for work, they should not settle down there and instead return to India and work for the country’s development.