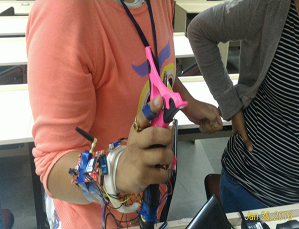 A team of 3rd year B.tech students have developed a device that women can wear with jewellery to stay safe.

The device, which they call `Kavach' (shield), is essentially a miniature Taser device that fires stun probes to deliver an electric shock that causes temporary paralysis.

The students said they will incorporate the gadget in jewellery in the form of a band that a woman can either wear like a ring or like a bangle. The gadget uses sensors to monitor the wearer's pulse rate, movements and sounds. If a woman wearing it screams, for instance, it will activate the device.

The team said they will connect the device to a mobile app that can alert police stations within a radius of up to 10km.


The VIT team includes S S Dutta, the product designer, Anmol Suxena, Abhra Dass, Arushi Agarwal, Srivinayak Eshwa, the application developer, and Rhea Pandey , all 3rd year BTech students.The team placed second at an IITBombay competition for best hardware and will receive Rs 20,000 in prize money to fund further development of the project. “We looked at how we could help Indian women because there has been a spurt in crimes against them in recent times,“ Dutta said.“Pepper spray is not easily available and takes too long to take out of a bag. That is when we came up with the idea of making a low-cost, wearable device.“

He said the device would be ideal for women who work late like call centre employees. The device is still in the prototype stage and the team is looking for support and investors to back the product.They have just applied for a patent so, for the moment, they said they couldn't reveal all details about the product. They have already got the support of leading brand Titan.


Some of the problems that the team now faces include developing a power source for the gadget and it water resistant.