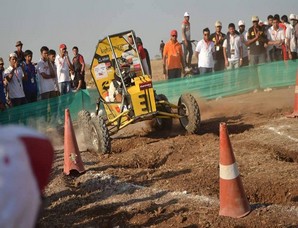 The team from the VIT University, Vellore was ranked third consecutively for the fourth year at the Baja SAE India, a 4-day inter-collegiate design competition, conducted by the Society for Automotive Engineers (SAE) at Pithampur in Indore in Madhya Pradesh last month.

According to a VIT release, Team Kshatriya from VIT was one of the first teams that participated in Baja SAE India series since its inception. Formed in 2006 by a group of undergraduate students of VIT, Team Kshatriya was ranked third consecutively for the fourth year at the mega motorsport event held at the NATRAX Facility at Indore. Teams of students from various universities designed and built off-road buggies to withstand the harshest elements of a rough terrain. Each year, as many as 110 Baja cars from around the world from countries including US, Brazil, South Africa and Korea enter the event held in India. The Team Kshatriya started its designing phase in early April, making a unique buggy each year which is better in every aspect compared to the previous ones. This is followed by market surveys, manufacturing phase involving patience, determination and perseverance. The last phase concluded with a month-long testing of the vehicle to check its design parameters and overall performance to prepare for the ultimate Baja test at the event.

The entire competition is divided into two stages, i.e., Virtual Baja and the main event, with the Virtual Round comprising over 300 teams from India and across the world. The best teams are sorted out based on design, practical ability and innovations. The main event comprises of Static and Dynamic Events awarded with points on the basis of judgment and performance. The static event includes technical inspection to verify whether the vehicle stands according to the rulebook specifications. This is done to ensure safety and fair competition among all the teams for design evaluation, cost evaluation and the sales and marketing presentation.

The Dynamic Event comprises acceleration test, hill climb and maneuverability event. These are specially designed to check steering systems and the driver’s ability followed by suspension and traction test.

The team started its designing phase in early April, making a unique buggy each year