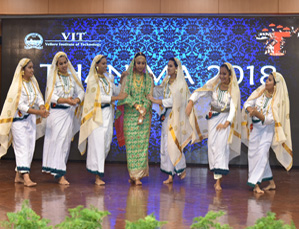 Thanima, the cultural festival to mark Onam held at VIT

The festival was inaugurated by Malayalam actor Amit Chakkalakkal. Dr. G.Viswanathan, Founder and Chancellor of VIT, handed over prizes to those who had extended help in all forms to the Kerala floods. Thanima is held at VIT and organised by students and faculty hailing from Kerala. The recent Kerala floods had caused immense destruction to the State and people from all over the world had contributed for relief and rehabilitation. Students, parents, staff and the management had mobilised Rs. 1 crore and this relief amount was personally handed over to Kerala Chief Minister Pinarayi Vijayan by Dr. Viswanathan. In addition, with help from philanthropists in Vellore, students mobilised Rs. 20 lakh worth of clothes, medicines and stationery and this was sent in a truck to Kerala. This year’s Thanima was held as an event to express gratitude to the people who had contributed to the flood relief. Speaking at the function held at Anna Auditorium, Dr. Viswanathan recalled that Thanima was first organised 17 years ago and this year’s edition was the 18th event. He said that Thanima was being staged this year as an event to express gratitude to all those who had contributed to the relief and rehabilitation efforts following the floods in Kerala. He said that he felt immensely happy that Thanima was conducted by students from Kerala, 1,500 of whom were studying here and 160 faculty, who taught at VIT. Thanima was an event in which not just people from Kerala took part, but students from faculty from all over India took part with great interest. He said that even though he had not studied Malayalam, he maintained very good relations with Malayalam speaking people. He recalled that when he became a Parliamentarian in the year 1967, he was able to work with left wing leaders A.K.Gopalan, his wife Susheela Gopalan, P.K.Vasudevan and E.K.Nayanar and others. Over 30 lakh people from Kerala were working all over the world, especially in Middle East countries and though their hard work, India got a revenue of Rs. 50,000 crore. A large number of women from Kerala too were working in large numbers abroad. Dr. Viswanathan said that Kerala had created record in the education and health sectors in the country. He said Kerala was blessed with greenery and rivers and it was very sad that thousands of people had lost their property in the recent floods. With the efforts of people who had contributed extensively from all over the world, the State was getting back to normalcy. He said that while students, faculty and staff had contributed Rs. 55 lakh, the management had contributed Rs. 45 lakh towards the Kerala Flood Relief Fund. He said that no other education institution had contributed such a huge amount. He said that in addition to the people dedicating themselves fully to relief and rehabilitation work, government staff too should work once a day towards this. He said that VIT students from Kerala should also work towards the development of their home State. On the occasion, Dr. Viswanathan handed over prizes to people who had extended remarkable help to the people of Kerala. Mr. Chakkalakkal, who inaugurated the event by lighting a traditional lamp, said that it gave him immense happiness to take part in the cultural festival Thanima organised by students and faculty from Kerala at a prestigious institution like VIT. He said that after completing his school in five schools, he went to Bengaluru to study engineering. He said that he had completed his engineering studies eight years ago and it was struggle to succeed in life that had brought him as chief guest at the function in VIT now. He said the students were very lucky to study in an institution like VIT and urged them to make full use of it. He extolled students to dream of their ambition and struggle they realise it. Until they realised it, the students should not fall prey to vices like smoking tobacco, liquor and any other addiction. Malayalam writer Pushpa Kurup was the guest of honour on the occasion. Director of Students Welfare Amit Mahendrakar and professors Naiji, Jagadeesh Kumar were present on the occasion. Earlier, students Remin and Irene welcomed the gathering. Students presented kummi dance, group dance, drama and other cultural programmes on the occasion. Student coordinators Sachin and Malavika proposed a vote of thanks.