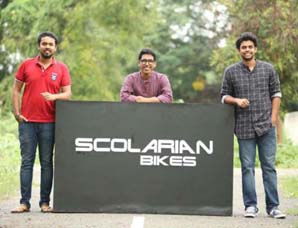 Three VIT, Chennai graduates have given the bicycle a much-needed makeover

Somy Sridas, Sachin Kishore and Varun Moorthy don’t get much sleep. “We do some of our best work at night,” shrugs Somy, discussing how they’ve turned a 2000-sq-foot house into a home, office and warehouse. “We begin at 11 a.m. and end at about 4 a.m.,” he says, adding with a chuckle, “And we love it. The only thing we love is making things!”


They do, however, routinely take a break from work every afternoon. “That’s when all three of us ride our bicycles out to a café. This way, we get cake, as well as new customers. Because people always stop us and ask about our cycles.”


When the trio graduated from VIT-Madras in June 2014, they set themselves an intriguing task: giving the everyday bicycle a modern makeover.


“Riding a bicycle is a part of our childhood memories,” says Somy. However, these days, younger people, especially those aged 23 to 29, tend to boycott bicycles. They don’t want to be seen riding one.” They decided to start working on finding ways to fit cycling into modern lives. “We wanted to create a product that looks aesthetic and is also well-engineered. We are working on this, while popularising it as an ideal option for the urban commute. Given the volume of traffic we see in big cities, we feel a fixie is the best possible option.”

CAPTAIN 09: A straightforward design with black frame and silver wheels

HERMIT 05: The classic bike with a professional look comes with a glossy copper finish and black rim

COP 100: Has a luminous coat and glows at night.

So, the three B. Tech graduates formed Scolarian Bikes, a hardware start-up that handcrafts fixies — bicycles with fixed gears. “We wanted a name that never existed. Scolarian doesn’t mean anything, so we intend to give it a new meaning. People should now associate the word with protective armour, because of our company. That’s why our logo features armour and an embedded sword.” The name — and philosophy behind it — become easier to understand when you realise that Somy is just 24 years old, and his two partners are 23. Their company, they admit, was funded by their parents, who together, put in Rs. 30 lakh as Scolarian’s initial investors. “They were happy to support us. They just said ‘Do something productive’,” says Somy.


Fortunately, the team had experience to build on. In VIT, they participated in Baja SAE, an intercollegiate design competition run by the Society of Automotive Engineers (SAE) at the national and international levels. “It’s a competition in which teams of students from all over the world design and build single-seater all-terrain vehicles from scratch. We apply engineering knowledge to design unique vehicles,” says Somy. Varun had been a part of Formula SAE Japan, where teams of students design and manufacture Formula racing-style cars. They also still have a patent pending on a mountain bike they designed as part of their final year project. “It has a unique suspension mounting. But is not ready to be released commercially — it needs more research.”


While more Indians are showing an interest in high-end bicycles, they say the market can be daunting. “Every year, 15 million bicycles roll out in India, but of that, just about 2 lakh are premium cycles, all priced between Rs. 15,000 to Rs. 25,000,” says Somy.


Operating out of Coimbatore, the one-year-old start-up focuses on its main strength: intuitive engineering. Since their products are fairly simple, with minimalistic parts, they say stocks don’t require much space. “We basically see ourselves as a design firm. The bicycles are 10 to 15 parts. We use about 8 tools. When we get an order, we put it all together and then ship it out,” says Somy. “Mass manufacturing is not the way to go. We want to be the face of our bikes. Afters spending several months on design, technology, prototype… we have a set design but there is always room for improvement,” adds Sachin.


After officially launching in Bangalore in March this year, the young engineers are happy with sales, even though they sell just about six to seven bikes a month right now. “Instead of taking on the big companies head-on, we bring a different aspect to biking: how cycling can be good for you. We involve customers in building their cycles and educate them on how they can dismantle and put them back together. This way, they also enjoy the touch-and-feel connect with their bikes,” says Sachin.


Customer satisfaction has been a driving factor for Scolarian. “All our bikes come with fixed gear, and the rider is connected physically and psychologically. Our customers have called to tell us how every ride helps them control stress,” says Somy. Varun adds, “We are also available to customers 24/7. When there is a problem, they just call us. It is the personal connect that builds confidence.”


“We didn’t want to get lost in the virtual world. A start-up, especially hardware, is considered difficult. It’s not true: there are people out there to help you,” says Varun. Sachin adds, “There is nothing to lose. There are no risks; it’s just a learning curve.”