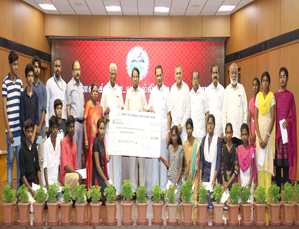 The 971 students received the financial assistance to help them complete their studies for the year 2018-2019. At a function held at Vellore Institute of Technology, Founder and President of Universal Higher Education Trust and Founder and Chancellor of VIT, Dr. G.Viswanathan and S.V.Balasubramaniam, Chairman of Bannari Amman Group of Companies, Coimbatore, took part and handed over the financial assistance to the 971 students. In his presidential address at the function, Dr. Viswanathan said that since its inception in 2012, the UHET has been helping thousands of poor students to help them pursue their college education. He said that for a society to progress, education for its youth was most important. If quality education was provided to the young population, the country would progress. He said that there were over 700 districts in India and 32 in Tamil Nadu. Dr. Viswanathan said the Vellore District should be the model district in entire India especially in the field of education and towards this objective, the UHET has extended financial of Rs. 5.5 crore to 5,075 young women and men students, including Rs. 53 lakh to 971 students this year. He said it was significant to note that two-thirds of the people who received this financial assistance were women and that it was everyone’s responsibility to ensure that women complete their college education before their marriage.

He said that it was also everyone’s responsibility to ensure that all poor students are educated and all should contribute to this endeavour. He said that if young people were disciplined, maintained punctuality and paid attention during their education, they would definitely get a good job and have a bright career and future. Dr. Viswanathan said that through the Placement Cell of VIT, 108 people had got jobs at Bank of America. Even though Donald Trump was the President of the United States of America, the Bank of America was being run and led by former students of VIT. Pointing out that India’s was population was the second highest in the World, Dr. Viswanathan said that around 55 crore people in India were below the age of 25. If all of them received proper and good quality education, India would soon become a superpower. Once the youth start earning after getting jobs, they should take good care of their parents, while at the same time, they should work towards the development of the country. Dr. Viswanathan observed that at present, Tamil Nadu was witnessing a remarkable improvement in the school education sector and added that the efforts of School Education Minister Mr. K.A.Sengottaiyan had to be appreciated. He also said Central and State governments should take all possible steps to ensure that every single youth of the country received quality higher education.

In his address, Mr. Balasubramaniam, who was the Special Guest on the occasion, said that in the developed countries, equal importance was given to technical education as much as basic education and India too should devote a lot of attention to technical education. However, while being compared with the United States and China, only 10 per cent of people in India received higher education and this number should increase, he said. He said that soon, India would be the country with the most number of youth and taking this into consideration, if the youth received a proper direction, India would emerge as the greatest among all nations. Earlier, Mayilambigai Kumaraguru, welcomed the gathering. Poet V. Pathumanar, M. Venkat Subbu, President of Darling group, K.Zawarilal Jain, J.Latchmaman, C.Kaisar, Ahmad and K.M.Devaraj, offered their felicitations. R.Muthu Veeran, Project Director, delivered a vote of thanks.