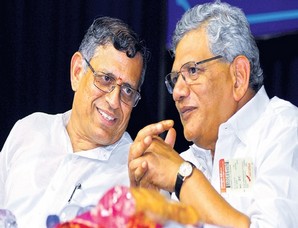 State BJP president Tamilisai Soundararajan was left to fend multiple volleys of criticism from a ‘consolidated opposition’ at a seminar on Union Budget organised by the Vellore Institute of Technology (VIT) here on Sunday.

The discussion was moderated by noted columnist S Gurumurthy.

Being the last speaker and the only BJP representative,  Tamilisai faced an array of criticism right from the onset, with Era Sezhiyan noting that the spending on education had not yet reached six per cent of the GDP, as recommended by the Kothari commission.

Yechury tore into the Budget labelling it pro-corporate. “There is reduction of `8,315 crore of direct taxation, while indirect taxation has gone up by `23,000 crore. This will affect the poor.” He also criticised the latest amendments to the Land Acquisition Bill and called for changing the slogan ;Make in India’ to ‘Make for India’.

Pointing out that the government’s role was to generate revenue and ensure equitable distribution, D Raja said the total allocation for sectors had reduced as the total revenue had gone down.

He chose to target the reduction in allocation for the Ministry of Panchayati Raj and said that the government should make public the list of the Non Performing Assets (NPAs), which were liquidating the public sector banks.

Responding to the criticisms, Tamilisai  noted that the allocation for health sector had been reduced to compensate in other areas, like for the construction of five lakh toilets.

The reduction is accompanied by an increased devolution of finances to the states in accordance with the recommendations of the 14th Finance Commission, she pointed out, mentioning that Tamil Nadu would get a much higher health allocation than in previous years.

The BJP leader also cited schemes like the PM Jan Dhan Yojana and Swachh Bharat Abhiyan to argue that the Union Budget was pro-poor.

Making the closing comments, columnist Gurumurthy said that the latest Budget, like its predecessors, had its positives and drawbacks.

However, he said that the game-changer would be the MUDRA bank, which would work to provide bank credit to the unorganised sector, which employed 10 times the workforce as compared to the corporate sector.