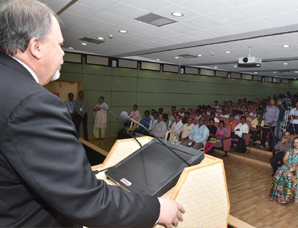 Universities, in addition to conveying specialised knowledge and supporting research, also has a function in facilitating social progress whether it is in ending racism in the US, improving condition of Dalits in India or attacking anti-Muslim bigotry in both countries, said Daniel Little, Chancellor of University of Michigan-Dearborn, USA.


Addressing the gathering at the inauguration of the International Transfer Programmes at VIT University on Tuesday, he recalled his conversations with Indian students at the University of Michigan and said he had found them to have “remarkable political sophistication” unlike American students.


He noted that they have had conversations on the social problems in America and India, and have found important commonalities in those problems.


He said there is emphasis on inclusiveness at the University of Michigan. “Indian students are ready to join the language of inclusiveness and mutual respect for various religious and ethnic communities,” he added.


Mr. Little said universities were also places where social progress occurred. “Universities should pay attention to their serious role as agents of change within their societies. If we don’t pay attention, we are letting down the next generation,” he said.