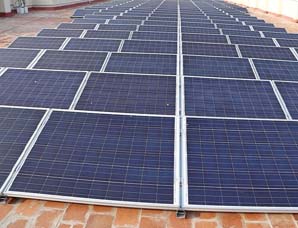 An informal survey conducted by Express after contacting residents of Vellore including social activists, reveals that the VIT initiative to install a 500 KW roof-top solar power-plant is being universally hailed. Most of those surveyed are suggesting that the state government be requested to relax norms and extend increased subsidies to enable more individuals to opt for roof-top solar power-plants as part of the Green Movement.


VIT University on Saturday unveiled a state-of-the-art solar power-plant at a cost of `3 crore within its campus that will supply electricity to five hostels and other office buildings with another 800 KW unit being in the pipeline.


NGO Hope House’s founder, Ruby Nakka, called the VIT initiative a “trend setter”, and said that the government should review and relax norms on solar power to transform consumers into becoming net producers of energy. Subsidy assistance should be extended to plants up to 10 KW power from the current subsidy given only up to 1 KW plants as the majority of consumers are using a greater number of electrical appliances than ever before. Assisting such households would reduce the pressure on the consumption of conventional power supply. There is a growing interest for putting up large, commercial rooftop solar projects which should also be considered for assistance by the state government, he added. He also pointed out that more incentives should be extended to the solar-power industry to enable them to build power plants at lower cost that would further reduce cost of energy. In this regard, the state government should set up solar panels on all roof tops of government buildings, on government lands such as hills, tanks that are lying vacant and not being used for any other activity. This will enable the state to become a power surplus which in turn will attract more businesses and industrial activity.
Social activist R Chandrasekaran, echoed Nakka’s sentiments and suggested that state government should install solar power plants in all households (according to the needs of the consumers) with variable capacities of power generation, and collect the cost of the plant in instalments, akin to consumers paying their electricity bills. He also suggested loan facilities to households opting for bigger power plants to encourage a greater number of households to avail the solar power system. The network of NHs and railway tracks should also be utilized by respective departments to install solar power plants not only to provide lighting but also to share power generated to neighbouring villages and towns, he noted.