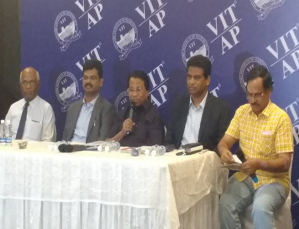 Admission to B.Tech. through VIT Engineering Entrance Examination in April 2017

After bifurcation of the State, Chennai-based Vellore Institute of Technology (VIT) is the first University to set up campus in Amaravati, the new capital of Sunrise Andhra Pradesh.

The VIT campus will start operating from the next academic year, in July 2017. The University will issue B. Tech. application forms from November 9 and admission-seekers will have to write the mandatory VIT Engineering Entrance Examination (VITEEE) to secure a seat.

“VIT in Amaravati will provide world class education to students of this State, and will help the Government realise its dream to make Amaravati a knowledge capital of India,” G. Viswanathan, the founder and Chancellor of the University told a press conference here on Tuesday.

Pointing to the fact that the Government of India had ranked VIT as the best private engineering institution in its maiden ranking of higher education institutions, he said the survey was carried out through the National Institutional Ranking Framework (NIRF). He said 14 B.Tech. programmes of the university had received accreditation by ABET, U.S., which rendered them on a par with the best in the world. “VIT also has the highest ‘A’ grade accreditation from NAAC,” he added.

In 1984, the institution was founded by Dr. Viswanathan, a former Parliamentarian and former Minister of Tamil Nadu, as Vellore Engineering College with 180 students. The institution got the deemed university status in 2001. The Chennai campus was started in 2010.

MoU with over 200 universities

Both the campuses put together, VIT has 32,000 students enrolled in 53 undergraduate, graduate and PhD programmes. The students hail from all the states and Union Territories of India and also from 56 countries. More than 21,000 students live in the on-campus hostels. VIT has signed an MoU with more than 200 universities all over the world. This helps the students to get a strong international exposure and prepares them for the world market. VIT also provides scholarships for students who undergo the Semester Abroad Programme (SAP). Students also have the option of studying two years at VIT and two years at one of the partner universities in the U.S., Australia and U.K. to get their foreign degree.