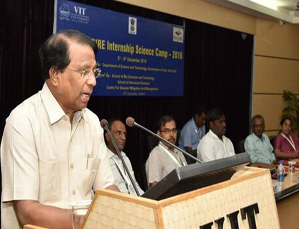 About 47 p.c. of children who joined Class 1 did not reach SSLC, says G. Viswanathan

Expressing concern over high dropout rate from schools, VIT University Chancellor G. Viswanathan on Sunday said that steps should be taken to prevent children from leaving the school.

He said about 47 per cent of the children, who joined class I, did not reach SSLC and dropped out of schools.

Mr. Viswanathan was speaking at the inauguration of the Department of Science and Technology (DST)-Inspire Internship Science Camp at the university. The camp, which is aimed at exposing students to science, is attended by 150 children from Class 11 (Science stream) from 33 schools.

“This shows that nearly 10 to 11 crore people do not go for higher education,” he said.

He said that students should concentrate on science as only scientific development could drive a nation’s progress. “As science grows, there will be new discoveries. Students must take up experiments in science. Scientific growth improves the standard of living of the people,” he said.

“Israel spends 4 per cent of its GDP on research while India spends 0.9 per cent. At least 80 countries spend 5 to 7 per cent on education, while India spent 3.5 per cent last year. The spending should be more,” he said.

R. Bhoopathi, Chief Educational Officer, Vellore, said the students should utilise education for the betterment of society. He urged them to concentrate on science and become scientists in future.

During the five-day camp, students were exposed to various aspects of science. They would visit the water treatment plant at VIT and other technology centres. Lectures on subjects such as physics, chemistry, and alternative energy were part of the camp. There would be hands-on experiments too, Radha Saraswathi, programme coordinator and senior professor, School of Bio Sciences and Technology, VIT, said.

The innovative ideas of students would be shared with DST, she added.