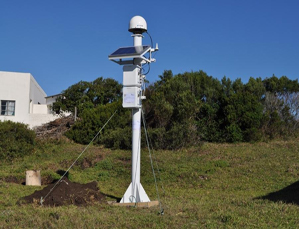 As India is aggressively promoting GPS-Aided Geo Augmented Navigation (GAGAN), which is world’s first Satellite-based Augmentation System to serve the equatorial region, a network of ground receivers are being build across the country to improve the accuracy and efficacy of the system. On Monday, Tamil Nadu’s first Global Navigation Satellite System (GNSS)/IRNSS receiver station was made operational at VIT campus here.

A Jayaraman, director, National Atmospheric Research Laboratory (NARL) told the Express, after inaugurating its regional lab where the receiver was installed in VIT in the presence of Chancellor G Viswanathan, that in the short-term plan around 40 GNSS stations in locations were planned.
The objective of GAGAN is to establish, deploy and certify satellite based augmentation for safety-of-life civil aviation applications in India using both GPS and IRNSS or NAVIC (Navigation with Indian Consellation).

Though the facility is primarily meant to help in aviation, there are plans to expand it to many other user segments such as intelligent transportation, maritime navigation, highways, railways, surveying, security agencies, telecom industry, personal users of position location applications, etc.
So, these GNSS receiver stations will capture the data constantly and allow the scientists to understand the atmospheric change in ionosphere better.
“We need good ionospheric models for low-altitudes suiting Indian conditions. There are some models available developed by US and Europe for high altitudes, which can’t be used for Indian conditions. There is enough evidence now that even a cyclonic disturbance on the ground will cause changes in ionosphere which will affect the GPS in aviations,” Jayaraman said.

For India, this is more critical in defence applications. During Kargil war, US refused to give India GPS to know the Pakistan deployment, after which India decided to have its own navigation system.


“While driving, NAVIC can use the terrestrial data from the towers, but that liberty is not available for aviation and defence applications. Army movement can’t be revealed to any private firm. Here, we will be doing reverse engineering. The current GPS has lot of bugs, but people don’t realise it. To over come those, we are putting permanent receivers around the state, like the one in VIT. Now, the location is constant. Later we can use NAVIC to get locations every five minutes. Each time, it will give a different time, which is an error. Over a period of time, we will study the error pattern and develop an accurate model,” he explained.