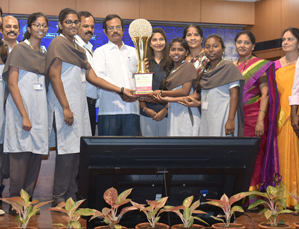 VIT Mathematical Meet was held at VIT on Friday. Executive Director of VIT, Ms. Sandhya PentaReddy, distributed prizes to the students who had won in the different contests. Shrishti Matriculation Higher Secondary School, Vellore, won the overall prize in the competition. Ms. Reddy also handed over cash awards and certificates to the students.
The Department of Mathematics of VIT School of Advanced Sciences had organised the contest. Over 2,450 students studying in classes between six and plus two from 65 schools took part in the contest. The competing students were divided in batches and the contests conducted for them included quiz in mathematics, essay writing and mathematical models. Among the contests held for students in Tamil medium, the first prize was won by Government Higher Secondary School, Karanampet, while the second prize was won by Islamiah Boys Higher Secondary School, Vaniyambadi and the third prize was won by Mangalambal Government aided Higher Secondary School, Wallajah.
In the contests conducted for students in English Medium, Sri Vardhaman Jain Matriculation Higher Secondary School of Virinchipuram, vellore won the first place, while Vidyalakshmi School, Keelputhur, Chennaangkuppam, Vellore won the second place and DAV Bhel, Ranipet, won the third place. Srishti Matriculation Higher Secondary School won the overall champion prize.
The prize distribution function of the contests was held at Anna Auditorium, VIT. Dr. A.Mary Saral, Dean, SAS, welcomed the gathering. Dr. B. Rushikumar, Head, Department of Mathematics and Dr. S.Balaji, Convenor of the event, also spoke.
Dr. R. Sivaraman, Founder of Mathematical Institute, Chennai was the Chief Guest on the occasion and handed over prizes to the winning students. Ms. Reddy handed over cash awards worth Rs. 45,000 and certificates to the students. In her address, she said that when she was studying in school, her favourite subject was mathematics. Mathematics, she said, provided solutions for various problems in science, engineering, technology and commerce. According to her, instead of rushing through their lessons on the eve of the examinations, it was sufficient if they spent a little time on their lessons everyday. They should read lessons not just to prepare for the examinations or to score high marks, but to expand their horizons of knowledge. The planet was not given to us by our parents, but by the Almighty as a loan. People had to give the planet to the next generation in a pristine form without it getting polluted and contaminated, she said. Ms. Reddy said that cleanliness was a necessity and instead of making only our homes clean, it was the responsibility of everyone to ensure the cleanliness of the entire surrounding clean. She appealed to the students that their good health was most important and hence they had to take up regular physical activity.
Earlier, the distinguished guests paid floral tributes to legendary Mathematician, Srinivasan Ramanujan. Organising Secretary Dr. G.Rajasekaran, thanked the gathering.