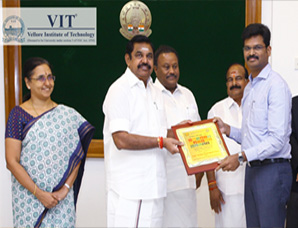 In recognition of its immense contribution towards increasing green cover of Vellore, its efforts to protect and rejuvenate Palar river also to conserve natural resources in Vellore district, India’s Premier Private educational institution – Vellore Institute of Technology (VIT) has been given the Green Award for the year 2017 by the Tamil Nadu Government.

Chief Minister Mr. Edappadi K.Palaniswami handed over the prestigious award to
Mr. G.V.Selvam, Vice President of the VIT at the Secretariat.

The coveted award is given each year to District Collectors, Industrial Units and Educational Institutions by the Tamil Nadu government. The award is recognition of efforts to conserve and protect nature and natural resources, promote and create the concept of environment protection and also to acknowledge efforts taken to reduce pollution.

VIT has been acknowledged as the best educational institution for protecting the environment. It is to be noted that VIT has planted several thousand saplings year after year not just in Vellore town, but also in different places in the rest of the district to reduce the impact of the heat wave in the district. The institution has a VIT Nature Club under the Green Vellore Project and has distributed several thousand saplings to students as part of efforts to imbibe the spirit of environment protection from a very young age.

The Green Vellore project, launched in 2008 aims at increasing green cover, water body restoration, and creation of traffic Islands and park in and around Vellore city. Further, VIT also launched the Palar River Clean Up Project and has this reaped rich dividends from all quarters.