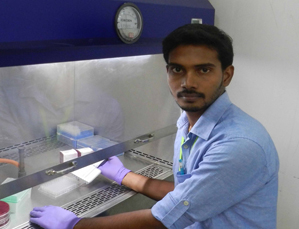 VIT Research Scholar is Young Scientist of the Year 2016

A PhD scholar of VIT University, Prasanth Manohar, has bagged the Young Scientist of the Year 2016 award. He received the award for his research work on “Phage therapy for multi- drug resistant clinical pathogens,” according to a press release.

The title is part of the young scientist competition of the year initiative of the FP7 projects: INNO INDIGO and INDIGO policy. This was initiated in 2014 with the aim of giving young researchers from India and Europe a platform to promote their research projects and ideas for cooperation between the two countries, the release said.

On his research work that he had showcased at the competition, Manohar, who is currently a research scholar at VIT, said that he was working on identifying the prevalence and dissemination of antibiotic-resistant bacteria among clinical pathogens in India. His work looked at isolating and characterising novel lytic phages for therapeutic purpose against multi drug resistant bacteria.

“My research focuses on freeze-dried preparation of cocktail phages to treat infections caused by these superbugs,” he said in the release.


The young scientist competition for this year began in May-July. There were more than one lakh applications this year. Based on a selection by a scientific evaluation panel, six scientists including Manohar were invited to participate in the EU-India STI Cooperation Days 2016.

From the shortlisted applicants, the INDIGO Facebook fans selected four finalists based on the video presentations. The four finalists presented their ideas in front of the EU-India STI Days audience.

The scientific panel members interviewed the finalists on stage and the audience voted for their favourite video.

Manohar, who is a research assistant under the guidance of Ramesh Nachimuthu, Department of Biomedical Sciences, School of Bio Sciences and Technology, VIT University, Vellore, emerged as winner.

He will be awarded a trip to a scientific conference of his choice in Europe and an INDIGO project scheme, the release said.