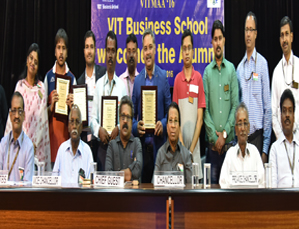 VIT University is working on to introduce ‘Online Certification Programme’ for its alumnus from January.

It would keep them abreast of their day-to-day knowledge and various developments taking place in the field of management, said VIT University Vice-Chancellor Anand A Samuel.

Speaking at the VIT Management Alumni Association (VITMAA-2016) celebrations here on Monday, he said the online programme would strengthen the bondage of the alumni with the university further.

Anand A Samuel said that the VIT Business School of Management had done 100 per cent digitilisation, by keeping in my mind the requirements of the future industries and its demand for students who had set their foot-prints in the area of digital.

He made an appeal to alumnus association members to join their hands with the VIT Business School and the students who were making remarkable activities in various projects.

He also wanted that the alumni should take a big role in university getting various rankings at the world-level, just as the business school had been placed recently in the sixth rank among various private institutions in the country.

In his presidential address, VIT University Chancellor G Viswanathan said that the time has come for all to realise our strength and the nature of competition to save the country from its adverse balance payments. He said for the growth of any country, growth of industries was necessary.

The growth of industries would ultimately take the country to improve the manufacturing capacity. He underlined that India had been spending every year Rs 2 lakh crore on its imports for Defence equipment, food items and this could be cut down, had the industries been started.

He said that the economic growth should go along with employment growth, and this could be possible only by Make in India plan of the Prime Minister Narendra Modi strictly taken and put into action.

Earlier, the Chancellor released a CD on VIT University Placement programme. At the function, Atandra Saurav Bhowal, a 1995 year student of the university was appointed as VITMAA chairman, Uppily Ramabadran (2002) as vice-chairman, C R Sundararajan (1997-99) as secretary, R Subashini as joint secretary and Rahul Dixit (2007-2009) as another joint secretary.