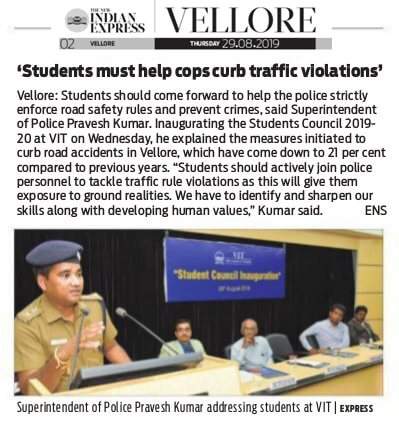 Vellore District Superintendent of Police (SP) Mr. Pravesh Kumar on Wednesday urged students and youngsters to help police in road safety and crime prevention. Inaugurating Students Council 2019-20 at Vellore Institute of Technology (VIT) on Wednesday (August 28, 2019), Mr. Pravesh Kumar, Superintendent of Police, Vellore District, Vellore, pointed out that with the steps taken by the Police with the participation of several departments including transport and students, road accidents in Vellore had come down to 21 percent compared to the previous years. “Students should actively get involved with police in road safety and crime prevention as this will give them a lot of exposure to ground reality. We have to identify and sharpen our skills to improve upon it and also should develop our human values to become leaders. World is a huge arena to cultivate leadership,” he said.

Delivering the presidential address during the inauguration, Dr. Sekar Viswanathan said that there were over 140 student clubs and chapters at VIT working in several society oriented projects. “I urge not only students of various clubs and chapters at VIT but also other youngsters in the society to get involved with police in road safety and crime prevention to make Vellore district a model for the entire state and country,” he said. Dr. Sekar Viswanathan also exhorted students to be responsible citizens by creating awareness among the public about wearing helmets and seat belts during driving so that lives of several people could be saved. Dr. S. Narayanan, Pro-Vice-Chancellor and Dr. Amit Mahindrakar, Director, Students’ Welfare, Vellore Institute of Technology (VIT) also took part in the inauguration.