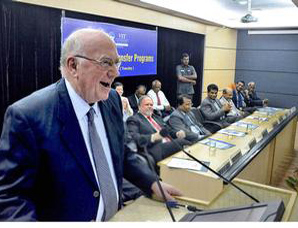 VIT students to get global exposure

To give students a global exposure, VIT University has launched international transfer programmes in partnership with nine universities in the US, Australia and UK.

After studying for two years at VIT, students can choose from any one of the nine partner universities – four each in US and Australia and one in UK – for the next two years of the engineering programme, VIT Chancellor G. Viswanathan said, during the inauguration of the programme on Tuesday.


“The number of universities under this programme will be increased. We want our students to get global exposure,” he added. On the advantage of such a programme, he said that India was a growing country, and by 2030, it would be supplying the maximum workforce to the world.


Talking about the education system in the US, he said, “US took over Europe due to the autonomy and freedom given to institutions, competition between private and public institutions and funding. There are 4,000 universities in the US, but no University Grants Commission or Ministry of Education.”
This flexibility, he observed, was not available in any other country.
Elaborating on the international transfer programme, VIT’s pro-vice chancellor V. Raju said the students of engineering programmes will have the option of studying the last two years in any of the partner institutes that included State University of New York, Purdue University in the US, Queen Mary University, UK, and Deakin University and RMIT, Melbourne in Australia.
“We will develop programmes at the bachelors, masters and doctorate levels for this programme. There will be faculty collaboration and faculty exchange,” he mentioned.


Sean Kelly, Australia’s Consul General, Chennai, said Australia offered plenty of opportunities in higher education. “Nearly 25 per cent of the post graduate students in Australia are international students. There are around 60,000 Indian students,” he said.


Australia next to US

He added that Australia was the second popular destination for Indian students, and the country overtook US recently. Among the reasons for attracting many international students is the quality of universities, he said.


“Australia is one of the most liveable countries in the world. Our cities are modern and very safe. We have a multi-cultural population. We also offer the best work rights. Students, while studying, can work for 40 hours for a two-week period. They can earn money to help with the cost of living,” he noted.
In addition, students, on completing UG, can stay on for two years for work, while it was three years after masters and four years after Ph.D, he added.
Raju Balakrishnan from the College of Business, University of Michigan-Dearborn, USA, said the university had established a partnership with VIT three
years ago. “We started off with business programmes. In three batches, 65 students from VIT have come to the University of Michigan. Now, we are expanding it to engineering programmes,” he said.