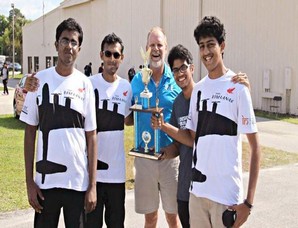 This year, it saw a global participation of 25 teams including IIT Kanpur, NIT Jamshedpur, Manipal Institute of Technology and other colleges from India and several American and European universities including McGill University, University of Western Ontario and Polytechnic Institute of NYU.

The teams were given a problem statement in September last year for the micro class category and were asked to design a light aircraft that could hold a cylinder of six-inch diameter. Team Vimaanas was adjudged the sixth best team overall and was also awarded the second prize for highest payload lifted, fourth prize for the highest payload fraction and the sixth prize for its design.

“We worked very hard to achieve this feat. But most importantly, we learnt to apply technical knowledge and test it practically. The competition also boosted our morale and confidence,” says Rushat Gupta Chadha, captain of Team Vimaanas.