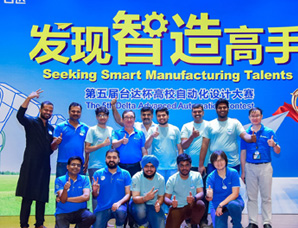 In yet another victory at an international event, students of Vellore Institute of Technology secured the first place at the Fifth International Delta Automation competition in China.

The VIT students received the prize, including medals and a cash award of 3,000 Chinese Yuan at the event held at Shanghai city.

The Fifth Edition of Delta Cup, an international competition among educational institutions organised by Delta Electronics, a global provider of power and energy management, conducted the competition on Advanced Automation Design. 76 teams from universities and colleges in India, China, Taiwan, Vietnam and Thailand took part. VIT was among the three teams from India.

The teams from VIT secured the first place for their design of tools for a humanoid robot tools for an automated conveyor belt system. The two teams each received Chinese Yuan 3,000 each from Bruce Cheng, Founder and Chairman, Delta Group.