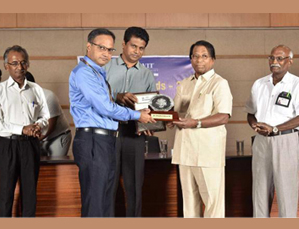 VIT takes the lead from IISc in Research Publications


In 2015, VIT University overtook Indian Institute of Science (IISc), Bengaluru and Indian Institutes of Technology in the number of research publications. It had published 18 papers more than IISc, according to VIT Chancellor G. Viswanathan.


Addressing the gathering at the Research Award-2016, he said, “As a nation, we are lagging behind in research. We have good potential but no State government spends on research, except for a few institutions.


The Central government spends a lot of money on research but this is only for government institutions.”


The Department of Science and Technology, Department of Biotechnology and DRDO were providing funds for both government and private institutions to take up research, he mentioned.


The country was spending one per cent of the GDP on research and this was inadequate when compared with countries such as Korea, United States, Israel and Germany, he added.


He pointed out that universities in China obtained incentives from the government, and had a lot of freedom and autonomy.


“The departments of the Government of India and State government should also take up research as a priority. Teaching and research have become inseparable. They should recognise institutions doing well in research,” he added.


Special awards were presented to faculty members, including, Geetha Manivasagam for being number one in India for research publications (2009-2014) in the subject area of material science, while F. Nawaz Khan was also awarded for being ranked third in the country among authors (2009-2014) in Chemistry. Faculty members who have been made Fellows of the Royal Society of Biology, Fellows of Royal Sociey of Chemistry were also recognized.


Among others, VIT Vice President Sekar Viswanathan and Vice Chancellor Anand A. Samuel were present.