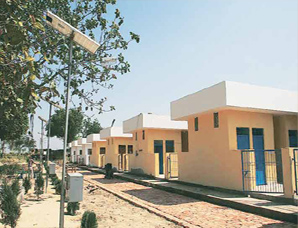 Ahead of the foundation-laying ceremony of VIT-AP campus on Thursday, the administration of the varsity announced that it will adopt three villages in the capital region and turn them into model villages.

In a press meet held on Tuesday, founder and chancellor of VIT University G Viswanathan said the varsity will adopt Velagapudi, Sakhamuru and Inavolu villages. "We will adopt the three villages where the government allotted us land. We will develop them with all necessary facilities - education, health and other infrastructure. The formal announcement will be made on the day of foundation-laying ceremony," he said.
The foundation for the first private university in the capital region, VIT-AP, will be laid on Thursday at Inavolu by chief minister N Chandrababu Naidu and union minister Venkaiah Naidu.
The varsity administration also announced that it will launch an initiative called Andhra Pradesh - Support The Advancements of Rural Students (AP-STARS), under which students from rural areas will get financial support. "We will select two students from each district - a boy and a girl - who top intermediate examination in their district. These students will be offered free education at VIT-AP. Boarding, lodging and even books will be free of cost for them," G Viswanathan explained.


The management has decided to extend this initiative to students from government junior colleges in rural areas. The students who top the intermediate examination need not clear VITEEE, the common entrance examination for admission, the management added.
Elaborating on VIT-AP's vision, Viswanathan said they are foraying into AP to increase the gross enrolment ratio (GER) in the state's higher education sector, besides providing high quality education to the people of AP. "India is behind the world GER average in higher education sector, with an average of about 23 per cent against the world average of 33 per cent. Some states like AP are doing well with around 27 percent, but we have a long way to go to meet global standards," he said.
The construction of campus at Inavolu will begin right after the foundation-laying ceremony and the operations will begin from 2017-18 academic year.
The university is looking at constructing three buildings (two hostels and one academic building) with a built up area of about 20 lakh sft by July, 2017 to begin the classes.
"The initial estimation of expenditure for the first phase is pegged at Rs 300 crore. The constructions will be finished by June/July. Eight courses in B Tech, M Tech and PhD will be available from the coming academic year. The academic session will begin in July, 2017 with about 1,000 students," vice-presidents of the varsity GV Selvam and Sekar Viswanathan told TOI.
While the fee structure will almost be similar to the present fee structure of VIT University campus in Vellore, the management said a final fee structure will be announced shortly. The management also stated that VITEEE-2017 will be held from April 5 to 16 next year for which the applications will be available from November 9, 2016.
VIT-AP will be a state private university which will abide by the AP Private Universities Act and will be independent of VIT University in its functioning. It may be recalled that the state government allotted 200 acres of land for the varsity. While the varsity has already purchased 100 acres by paying Rs 50 crore, the remaining will be given in the second phase subject to condition that the varsity should have 18,000 students within five years of commencement of operations.
Pro vice-chancellor of VIT University V Raju, who will be the vice-chancellor of VIT-AP and other officials from the varsity were also present.