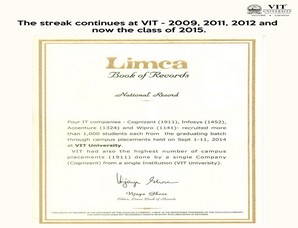 VIT University earned a place in the Limca Book of Records for the fourth year in succession for placing the maximum number of students in a single slot through its campus placement drive for the 2015 graduating batch, the selection for which was held between September 1 and 11, 2014.

“These records show that we can set records and achieve it whenever we dream of it. We plan to enter the Guinness Book of Records. There is no stopping VIT,” the chancellor said.