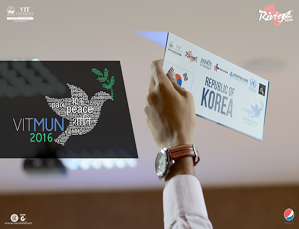 VITMUN 2016 - Where your voice matters

MUNs provide a unique forum for students to understand the role of diplomats on the world stage. By simulating real world situations, an MUN gives delegates an opportunity to deliberate, debate and lobby for change and solutions to issues that our society currently faces.

With every returning edition, VIT Model United Nations promises to be bigger in terms of participation, and better in terms of quality.

The Debate Society VIT conducted the 4th edition of the conference from 28th to 31st January, 2016, as a curtain raiser to Riviera.

After the huge success of the previous year's edition, this year saw participation from over 425 delegates, and a stellar executive board that could easily boast itself as one of the country's best.

This year’s edition of VITMUN was officially affiliated to the HeForShe Campaign- the UN Women’s Solidarity Movement for Gender Equality, the Young Leader’s Consortium (an International Steering Committee Member of the UNSECO GAMAG) and the UN Information Centre for Bhutan and India.

On the 28th of January, Mr. Varun Jhaveri, as part of YLCU conducted a workshop on the need for young leaders, and why we need direction in our goals right from early on.

The Chief Guest for the opening ceremony, on the 29th of January, was Mr. Krishnamurthy Vijayan, who is founder CEO of Tamil Nadu Infrastructure Fund Management Corporation. He was the executive chairman of JP Morgan Financial Asset Management India Pvt Ltd and has extensive knowledge in the Indian Mutual Fund Industry. He has also been a member of the Governing Board of Association of Mutual Funds in India. He continues to be a trustee of SBI Mutual Funds and Sriram Fortune, besides being on the board of Rainbow Houses and Pragati Foundation, amongst others.

Over the three days, there were 7 committees being simulated- the UNGA DISEC, the SOCHUM, UNHRC, UNCSW, UNSC, ECOSOC and CHAOS. CHAOS, or the Committee to Halt the Annihilation of States- was a unique futuristic committee set in a dystopian world at the brink of a third world war. Issues being discussed in other councils ranged from the situation in Afghanistan, to the refugee crisis in Europe, to the role of Women in terrorism and the Greek Debt Crisis.
The International Press conducted a press conference on the final day of the conference, reviewing the resolution drafted in every committee.
This year, there was prize money worth Rs. 3.5 Lakhs, with every committee having a Best Delegate, a High Commendation and a Special Mention award. SRM University swept most of the awards, and as a result were given the Best Delegation prize worth Rs. 20,000.
VITMUN strives to be a congregation of global young leaders- where we not only encourage debate on issues of international importance, but seek to promote tools of diplomacy, discourse and negotiation.

Keeping that in mind, it's safe to say that this year's conference has laid the path for an even bigger conference next year.