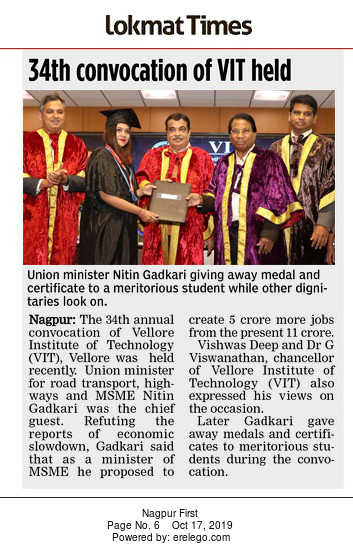 The Government of India proposes to generate wind power from Tuticorin, Kandla and Paradip ports which will be a low cost one.

Delivering his address at the 34th Annual Convocation of Vellore Institute of Technology (VIT), Vellore on Saturday (September 28, 2019), Mr. Nitin Gadkari, Minister for Road Transport, Highways and MSME, said that he had already had discussions with the Union Power minister in this regard. This will also establish desalination plants to solve the drinking water problems besides producing power at a low cost of Rs. 2.50.

He said that during his tenure as Union Water Resources minister he had solved several inter-state water problems including Polavaram project between Andhra Pradesh and Telangana. It was unfortunate that he was unable to solve the Cauvery water dispute between Tamilnadu and Karnataka due to lack of political will between the leaders of both the states.

Mr. Nitin Gadkari said that due to realignment of Delhi-Mumbai express highway through the help of Google Maps the cost had come down considerably. The project would connect the rural and tribal areas of Madhya Pradesh and Maharashtra. The project would be completed in two years’ time ahead of the schedule. This was due to the political will of the Government, he added.

Asking emerging engineering graduates to have an out of the box solution, the minister said they should also develop entrepreneurship skills to become leaders. They should not think of getting jobs but provide jobs as entrepreneurs.

The four major skills of the graduates should possess are communication skills, leadership skills, creative problem solving and strategic thinking, he said.

The minister noted that when he was Maharashatra’s Public Works minister, he had completed the Mumbai-Pune express highway project in a record time with public funding. The officials said that the project was not feasible but because of his out of the box thinking he had made it possible and said that engineers should also think on the lines innovation.

Refuting the reports of economic slowdown, Mr. Gadkari said that as a minister of MSME he proposed to create 5 crore more jobs from the present 11 crore. Twenty Four percent of the country’s GDP came from MSMEs and five from Agriculture.

Mr. Vishwas Deep, Global Talent Acquisition Head, Wipro Limited said that his company and Vellore Institute of Technology (VIT) has created a record in the Limca Book of Records by recruiting a large number of students from a single institution for the past 3 years. This year alone Wipro Limited has recruited 278 students from VIT. He said learning was the continuous process as the technology gets updated every day.

Dr.G.Viswanathan, Chancellor, Vellore Institute of Technology (VIT) said VIT had been running “Support The Advancement of Rural Students (STARS)” programme by providing free education to toppers of class 12 Government examination (Two students) from each district of Tamilnadu, at VIT. Though VIT had been recognized as one of the Ten Institutions of Eminence among the private universities, his dream was to make it on par with international institutions. Praising the administrative skills of Mr. Gadkari, Dr. G. Viswanathan said that Mr. Gadkari is trying to increase the length of national highways in the country from 96,000 kms to 2 lakh kms and converting two lane highways into four lane ones.

Later Mr. Gadkari gave away medals and certificates to meritorious students during the convocation.